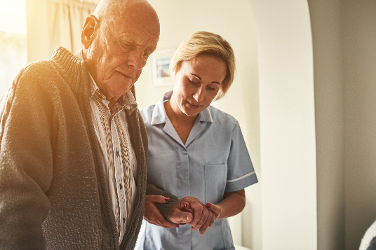 West Lothian HSCP identified in 2019 that the organisation needed to explore how to further enhance Dementia care to in order to improve earlier diagnosis; support people with a current Dementia diagnosis to remain within at home and provide Specialist Dementia knowledge to HSCP staff.

Sharon Sansome, West Lothian HSCP's Clinical Nurse Manager for Older Adult Mental Health, said: "I was keen to lead the development of this role and bring it to fruition.

"We were fortunate in West Lothian that our Mental Health Nursing Team had highly skilled staff and the decision was taken to grow their existing knowledge to create an Advanced Nurse Practitioner in Dementia."

This new role has previously not existed within West Lothian HSCP and is the first of its kind in Scotland.

Sharon added: "I started from the beginning, identifying what the role would look like and established a process to recruit an individual who would travel the journey with me to become the Dementia ANP.

"However, I was unable to just advertise and recruit into the role. ANP training is specific, requiring 2 years of academic and clinical training.

"Sourcing the academic training through Queen Margaret University, and securing a place, I had at most five weeks to recruit a Trainee ANP to undertake the training and together we would develop the role from non-existent to qualified ANP."

The role has now been appointed and the successful applicant was Mel Rowlands, who has now joined the West Lothian HSCP team.

A key part of the role is to ensure that collaborative working takes place between the West Lothian Care Home Team, REACT, Consultant Psychiatrists, GPs and Community Hospitals to provide an enhanced model of care for those living with Dementia.

Fast forward to July 2022 and despite the Pandemic, West Lothian HSCP has its first fully qualified Dementia ANP, who is part of the ANP weekend rota for the Care Home Team, and who delivers a Nurse-Led clinic for Dementia diagnosis, which has significantly reduced the waiting time for those referred by their GP.

Look out for further updates on how we plan to develop the ANP process in West Lothian HSCP.

Back to LATEST NEWS
Links